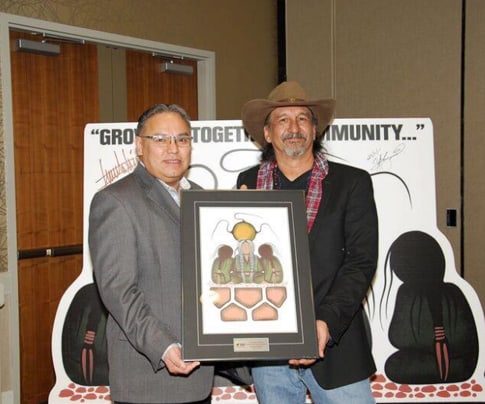 Ernie Scolesis a First Nation artist who is of native ancestry from Barrens Lands Indian Band. Early in life Ernie was provided with a vibrant interest in the arts. From a young age he was encouraged to develop his talents in drawing and culture. When Ernie was 13he began to operate his own trap line which was given to him by his adoptive family in their efforts to maintain a connection to his Aboriginal culture and traditions. This trap line allowed Ernie to sell his furs making this the beginning of Ernie’s entrepreneurial spirit. At the age of 16 Ernie began work as a house painter and quickly realized he was able to achieve more freedom by working. Ernie began painting with Isaac Bignell who became one of his mentors. Over the next few years of his life, Ernie started to implement more and more of the teachings from his many mentors including Alex Janvier, Dale Auger, David William and his mother Diane Scoles. He applied his knowledge to his work and creative engagement. Ernie has been involved in the Aboriginal community contributing to cultural events, youth engagement and working with organizations and Elders continuously.

For the past 16 years Ernie has owned and operated Scoles Fine Arts and Framing. He started his business by gradually buying equipment and doing framing out of his home. He started showing his work, gaining attention and building his reference network. Currently his business features a gallery and production studio where he has completed artist’s commissions, specialty framing and marketing initiatives for various projects. Ernie provides mentorship to new entrepreneurs and aims his sights to building capacity for Aboriginal people wishing to enhance their skills in creative industries. He has hosted workshops for professional development along with community presentations to various schools and organizations.

Ernie is the recipient of two Governor General Awards. He is an active community builder that constantly provides contributions to individuals, organizations and Aboriginal initiatives. Ernie’s collaborations to hosting artist workshops and showcasing fine arts and Aboriginal culture, has been a source of motivation for many artists and communities to build on the appreciation and opportunities that may be achieved through recognition of the arts.

Ernie has made regular contributions to organizations such as the Central Urban Metis Federation, Saskatchewan Indian and Metis Friendship Centre, Federation of Saskatchewan Indigenous Nations, Northern Saskatchewan Trappers Association and Egadz. Ernie has contributed immensely to supporting the experiences of Aboriginal women as he believes “women are our strength and provide life” and have an important role not to be taken for granted. He has a partnership with the Saskatchewan Aboriginal Women’s Circle Corporation that builds management skills and training that lead to employment, education and professional development for Aboriginal women.

Ernie has also supported the need for spiritual well-being by sharing his story of being adopted, supporting other adoptees and investing in ceremony to connect with traditional knowledge keepers. He has a great appreciation for his Elders and promotes the importance of learning protocol. Ernie has recently been working with his Elder on his traditional regalia so that soon he may have his coming out ceremony in the pow wow arbor in men’s traditional dance. Ernie believes and has learned through his own life experiences, that well-being is not achieved without giving attention to physical, emotional, intellectual and spiritual areas of development.